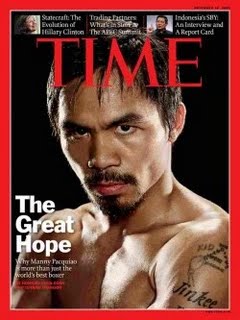 Manny Pacquiao is hugging the headlines ones again..this time in the cover of the prestigious Time Magazine Asia Edition in a full article entitled, “The Meaning of Manny Pacquiao”. As an athlete, Manny has really gone a long way. From the very skinny lad doing rounds in local boxing in his hometown and many other places thereafter claiming title after title and raking money beyond what his coffers can handle. Indeed, Manny is an icon in the boxing world and is up to even more with his attempt to claim a 7th world title in the MGM Grand Arena in Las Vegas this November 14 (November 15th in Manila) against Puerto Rican Miguel Cotto.

Of course his road to success is not easy..he has gone through a lot. Physically for that matter. He has fought many weight classes and has to endure big punches from equally capable opponents. At the end, he is victorious and has been the pride of the Filipino people ever since. He tried his luck in politics as well but to no avail. For many of his fans, he is better of as a boxer than as a politics. For sure he wants to help many but helping them can be in another form and not necessarily having to test his feet in the dirty waters of politics.  Being an inspiration to many by excelling into spots and avoiding drugs or other vices is good enough contribution.

He is the 2nd Filipino to be in the cover of Time Magazine, the first being the late President Corazon Aquino then feted as “Woman of the Year”. Time said he is a demigod in the Philippines with his myth of origin similar to a Greek or Roman hero. This may be true. Only he can literally stop not only the traffic in the Philippines but the crimes as well during his fights. It is always reported that whenever Manny fights in the ring, the crime rate is almost zero in most parts of the Philippines.  He may be the Achilles of modern times. Only thing is that we hope his opponents will not discover his Achilles’ heels.

Manny truly deserve this accolade and we pray for his success in his forthcoming fight as well as the hope that success will not change his humble ways. For us, that’s the true meaning of Manny.

Update: I have been visiting several bookstores and news stands here in Bangkok trying to get a copy of the Time Magazine Asia Edition with Manny on the cover. However, I can only see the one with Hillary Clinton on it although the full article of Manny is still inside the pages of the mag..Could have added it to my personal magazine collection. Not that I am disappointed to see Hillary on the cover cos she is such a powerful and respected figure but I was expecting to at least see  a copy of the mag with Manny on the cover..of course as a Filipino it is my pride to see him on the cover of the prestigious mag..