Last Sunday Night, I got the chance to watch Boy Abunda’s TV programme in ABS-CBN called “The Bottomline” via video streaming in Pinoy Channel.TV. It was my first time to watch this episode and actually am not aware of such program till that night. The Bottomline is interesting, trending if not fearless. Boy is his usual self, a good TV Host. It goes to prove that he is not only a veteran show business entertainment host but can also tackle various controversial topics.

I have not read the controversial book yet so I can’t say much about it at this stage. However, what I like to point out in this blog post is the sheer power of writing.

History has proven that a writing can change the course of the future be it an individual, or even a nation. Dr. Jose Rizal, the Philippines’ National Hero used his various literary works to open the minds of the Filipinos and to fight for their rights during the Spanish era. These writings became the inspiration of the Katipuneros which eventually led to a full-blown revolution.

Anne Frank, the young girl originally from Frankfurt became a worldwide figure because of the publication of her diary (which was translated into many languages) detailing their life in hiding during World War II. Time Magazine eventually named her in 1999 as one of “The Most important People of the Century”.

And who would’ve think that J.K. Rowling who was literally an unknown figure before the year 1997 will gain international prominence and become a billionaire just by writing and publishing series of books about a young wizard named Harry Potter?

Nora Daza who has written and modified/ invented many Philippine recipes is considered an icon of Philippine cuisine and one of the respected cook book author.

I remembered working in a hotel group earlier- – part of their PR activity is inviting 2 or 3 well known blogger, house and dine them in the hotels for free and as an exchange, these bloggers have to write blog posts or articles about their travel experience and stay in the hotel. This goes to show how powerful their writings are in convincing would-be guests of these hotels.

Last year during the onslaught of Typhoon Ondoy, there was one shoutout in Facebook made by a Filipina based in Dubai. The exact words were  “Buti na lang am here in Dubai! Maybe so many sinners back there! So yeah deserving what happened!”. This remark is very strong and really got through the nerves of many Facebook users the fact that the calamity brought vast devastation in many parts of Luzon and it was very unexpected and the country has yet to recover from the tragedy when the remark was made. The post spread in the net like wildfire and the succeeding comments and invectives hurled at her are really so bad that you can’t take it as person though I can’t blame them for doing so because her remark is truly inconsiderate and uncalled for.

Truly, writing is a very powerful tool and good way to communicate.  Writing is a common task as we do it almost everyday. Yet no matter how common it is, there is always something new to write.

The people I mentioned above has definitely caught our attention if not touched our lives in some ways and many of them has made writing their source of income.  Some people who earn a living out of writing don’t mind destroying one’s reputation if they feel it’s worth millions of bucks without considering if the person they are writing about will be terribly affected.

At the end, can they call themselves prolific writers? I guess the key to effective writing is to do it wisely, morally and objectively and try to communicate with your target audience.

I believe by right, I am a writer too (though I literally type it in my computer and post online) which I share through my blogs. With my posts, I am giving my views and opinions on certain topics or issues as well as just conveying my random thoughts and wisdom about life in general.

I am a sentimental person. I would keep letters, cards and notes from family, friends and loved ones. Maybe because I don’t receive too many so I still have the mood and time to keep it.

On the second thought, I just love reading them over and over again. I feel good after reading the personal message they’ve specially written for me.

One of the simplest yet most powerful and touching letter I received in my lifetime comes from my niece during my recent trip back home. She handed me the letter with drawing she personally did upon learning my short vacation. I am sharing to all of you. 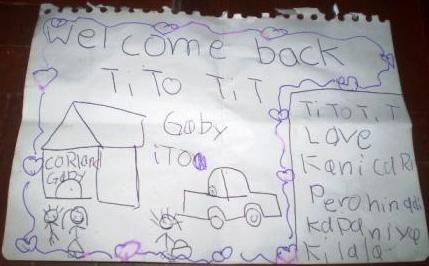 Keep on inspiring through your writings… so others will enjoy reading…